How To Install uTorrent on Ubuntu 14.04

In this tutorial, we will show you how to install and configuration of uTorrent on Ubuntu 14.04. For those of you who didn’t know, uTorrent is a freeware and a closed-source BitTorrent Client. One of the most used lightweight BitTorrent Client, Now it is available for Linux as a uTorrent Server. The µTorrent is designed to use minimal computer resources while offering functionality comparable to larger BitTorrent clients such as Vuze or BitComet and also it provides performance, stability, and support for older hardware and versions of the operating system. It is available for Microsoft Windows and Mac OS X.

This article assumes you have at least basic knowledge of Linux, know how to use the shell, and most importantly, you host your site on your own VPS. The installation is quite simple. I will show you the step-by-step installation uTorrent on Ubuntu 14.04 server.

Open Terminal and run the following command to install dependency libraries. Assign the password for the user when asked:

Move the downloaded tar.gz directory to /opt directory. Run the following commands or you can also do it manually:

Run the following commands to give proper permission to the uTorrent:

Run the command to link the uTorrent server to the /user/bin directory:

Now you can start the utorrent server by using the following command in the terminal:

Now you can access the utorrent server from your browser, go to the following link:

Important: Type the User Name as admin and leave the password field as empty and click ok. Check the screenshot below. 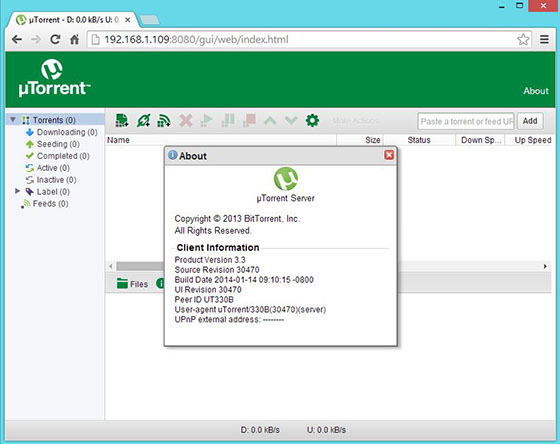 Congratulations! You have successfully installed uTorrent. Thanks for using this tutorial for installing μTorrent (uTorrent) in Ubuntu 14.04 systems. For additional help or useful information, we recommend you check the official uTorrent website.