How To Install Jekyll on CentOS 7

In this tutorial, we will show you how to install Jekyll on CentOS 7. For those of you who didn’t know, Buildbot is a continuous integration tool based on Python which automates the build, test, and releases software cycles. It is built using the Twisted networking engine, supports parallel execution of jobs across multiple platforms, and is compatible with all major operating systems.

This article assumes you have at least basic knowledge of Linux, know how to use the shell, and most importantly, you host your site on your own VPS. The installation is quite simple and assumes you are running in the root account, if not you may need to add ‘sudo‘ to the commands to get root privileges. I will show you the step-by-step installation of Jekyll on CentOS 7.

Jekyll requires Ruby to work, so we have to have it installed on the server. It is available in the official CentOS 7 repositories, so we can simply install it running the following command:

Once done, you can run the following command to check if Ruby is installed successfully:

We can test that Jekyll is working by checking the version installed:

After it is done, use the gem install command to install the bundler:

Step 4. Create a blog and up the server using Jekyll.

Now we are ready to create the blog and run the server. The below-given command creates the directory called idrootblog. You can give another name of your choice. In this directory, the Jekyll configuration file and setup are all set:

Change to the newly created directory idrootblog or the new name which you have given at the time of using command Jekyll:

Start the Jekyll application and replace the below-mentioned IP address with your ip:

Jekyll will be available on HTTP port 4000 by default. Open your favorite browser and navigate to http://your-domain.com:4000 or http://your-server-ip:4000/ 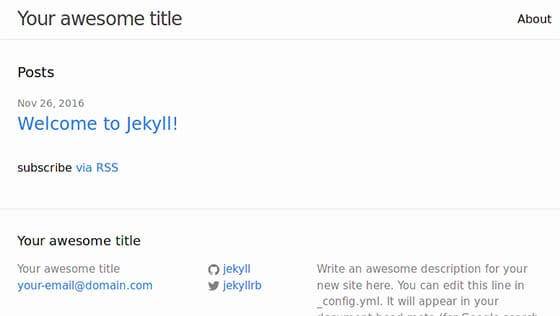 Congratulations! You have successfully installed Jekyll. Thanks for using this tutorial for installing Jekyll on CentOS 7 systems. For additional help or useful information, we recommend you to check the official Jekyll website.