How To Setup NTP Server and Client on Ubuntu 20.04 LTS

In this tutorial, we will show you how to install a setup NTP server and client on Ubuntu 20.04 LTS. For those of you who didn’t know, NTP (stands for network time protocol) is used to synchronize the system clock of the client system with the clock of the server. The NTP server has features that allow synchronization between two systems with an accuracy of one nanosecond so that the two systems can communicate easily. System time applies not only to the user but also to the computer itself. In fact, time stamps make it easy to communicate between two or more computers and provide network services properly, as well as optimize the network card.

This article assumes you have at least basic knowledge of Linux, know how to use the shell, and most importantly, you host your site on your own VPS. The installation is quite simple and assumes you are running in the root account, if not you may need to add ‘sudo‘ to the commands to get root privileges. I will show you the step-by-step installation of the configured NTP server and client on Ubuntu 20.04 (Focal Fossa). You can follow the same instructions for Ubuntu 18.04, 16.04, and any other Debian-based distribution like Linux Mint.

Run the following command below to install the NTP server to your Ubuntu system:

You can verify the installation from the following command:

By default, NTP protocol comes with default NTP pool servers already configured in its configuration file as shown below in the /etc/ntp.conf file: 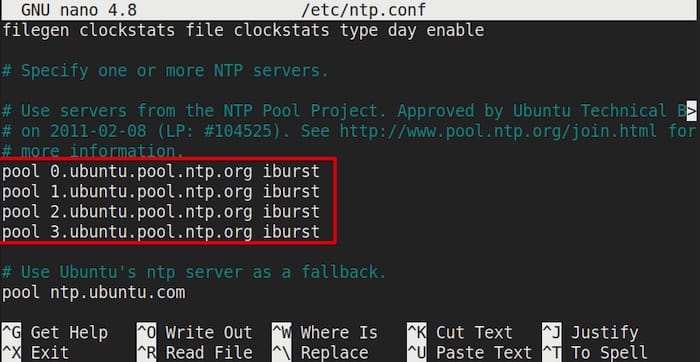 Now restart the NTP service for the changes to take effect:

If you have a firewall enabled on the Ubuntu system, you’ll need to allow the port for NTP in order to accept incoming requests:

To manually synchronize the NTP server we need to use ntpdate, Use the command below to install it:

Next, execute ntpdate use the following command below:

Then, disable the systemd timesyncd service because we will be using our NTP server for this instead. Enter the following command:

Now we need to install the NTP daemon on our client system:

After that, edit the configuration file on the client machine so that it automatically syncs with the NTP server:

In order to view NTP’s current synchronization status, run the following command below in Terminal:

Congratulations! You have successfully configured the NTP. Thanks for using this tutorial to set up the NTP server and client on Ubuntu 20.04 LTS Focal Fossa system. For additional help or useful information, we recommend you check the official Ubuntu website.