How To Install Apache Airflow on Ubuntu 20.04

In this tutorial, we will show you how to install Apache Airflow on Ubuntu 20.04 LTS. For those of you who didn’t know, Airflow is one of the most popular workflow management solutions, it authors, schedules, and monitors workflows. Airflow is written in Python, and workflows are created via Python scripts. Airflow is designed under the principle of “configuration as code”.

This article assumes you have at least basic knowledge of Linux, know how to use the shell, and most importantly, you host your site on your own VPS. The installation is quite simple and assumes you are running in the root account, if not you may need to add ‘sudo‘ to the commands to get root privileges. I will show you the step-by-step installation of the Apache Airflow workflows management tool on Ubuntu 20.04 (Focal Fossa). You can follow the same instructions for Ubuntu 18.04, 16.04, and any other Debian-based distribution like Linux Mint.

MySQL server is required. If you do not have MySQL installed, you can follow our guide here.

Run the following command to install Pip to your system:

Before installing Apache Airflow, you’ll need to run the following commands to make sure the necessary dependencies are installed:

Once successfully installed, open a web browser and type the URL: https://localhost:8080. You should see the following page: 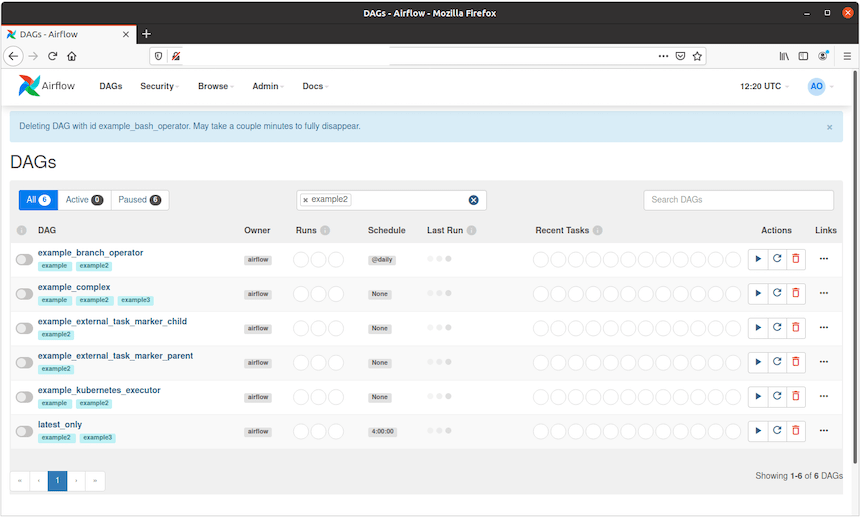 Congratulations! You have successfully installed Apache Airflow. Thanks for using this tutorial for installing the Apache Airflow workflows management tool on Ubuntu 20.04 LTS Focal Fossa system. For additional help or useful information, we recommend you check the official Apache Airflow website.