How To Install Atom Text Editor on Ubuntu 22.04 LTS

In this tutorial, we will show you how to install Atom Text Editor on Ubuntu 22.04 LTS. For those of you who didn’t know, The Atom text editor is a free and open-source source code text editor that is available on many cross-platforms such as macOS, Linux, and Microsoft Windows. It supports more than 35+ programming languages by default, and you can extend its functionality by installing plugins and look by installing themes.

This article assumes you have at least basic knowledge of Linux, know how to use the shell, and most importantly, you host your site on your own VPS. The installation is quite simple and assumes you are running in the root account, if not you may need to add ‘sudo‘ to the commands to get root privileges. I will show you the step-by-step installation of the Atom free and open-source source code text editor on Ubuntu 22.04 (Jammy Jellyfish). You can follow the same instructions for Ubuntu 22.04 and any other Debian-based distribution like Linux Mint.

By default, the Atom is not available on Ubuntu 22.04 base repository. Now run the following command below to add the Atom repository to your Ubuntu system:

Next, import the GPG key:

After the repository is enabled, now install the latest version of Atom using the below command:

Confirm the installation and version build with the following command:

To install Atom, simply use the following command:

Once successfully installed on your Ubuntu system, run the following path on your desktop to open the path: Activities -> Show Applications -> Atom Editor or launching it through the terminal with the command shown below: 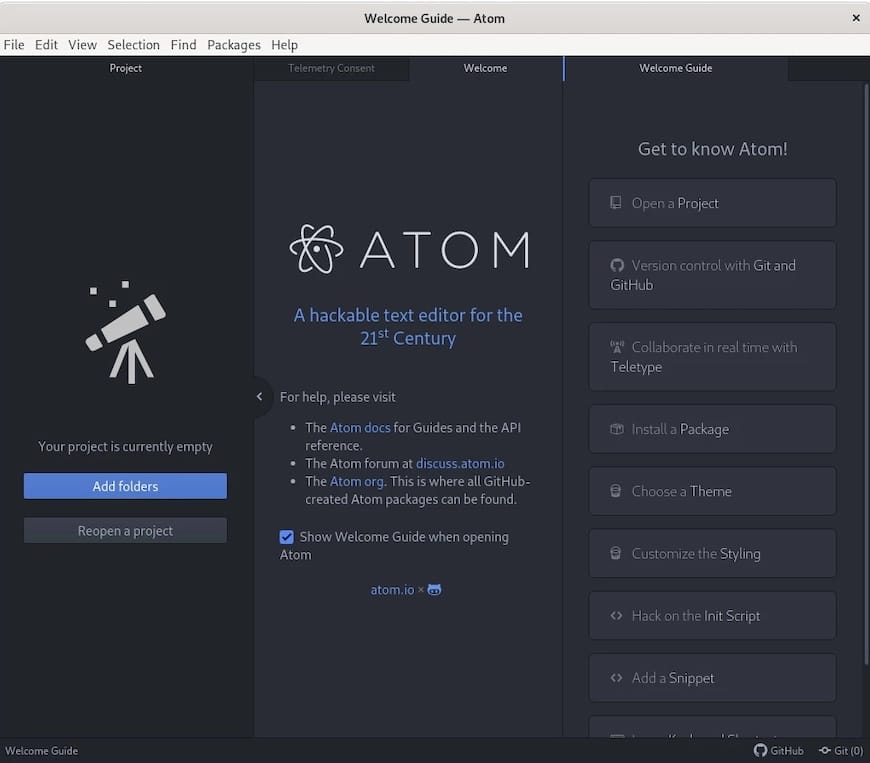 Congratulations! You have successfully installed Atom. Thanks for using this tutorial for installing the Atom open-source text and source code editor on Ubuntu 22.04 LTS Jammy Jellyfish system. For additional help or useful information, we recommend you check the official Atom website.