How To Install Cinnamon on Debian 11

In this tutorial, we will show you how to install Cinnamon on Debian 11. For those of you who didn’t know, Cinnamon is the default desktop environment of the Linux Mint distribution which offers advanced features and a traditional user experience. Cinnamon is also available as an optional desktop for other Linux distributions like Ubuntu, Fedora, Arch Linux, OpenSUSE, etc.

This article assumes you have at least basic knowledge of Linux, know how to use the shell, and most importantly, you host your site on your own VPS. The installation is quite simple and assumes you are running in the root account, if not you may need to add ‘sudo‘ to the commands to get root privileges. I will show you through the step-by-step installation of the Cinnamon desktop environment on a Debian 11 (Bullseye).

By default, Cinnamon is available on the Debian base repository, Now we run the following commands to install Cinnamon to your Debian Bullseye system:

After complete installation better to restart the system by typing the following command in Terminal:

Once successfully installed, you will see the login screen, then click the icon which is lower-right and select [Cinnamon] shown below: 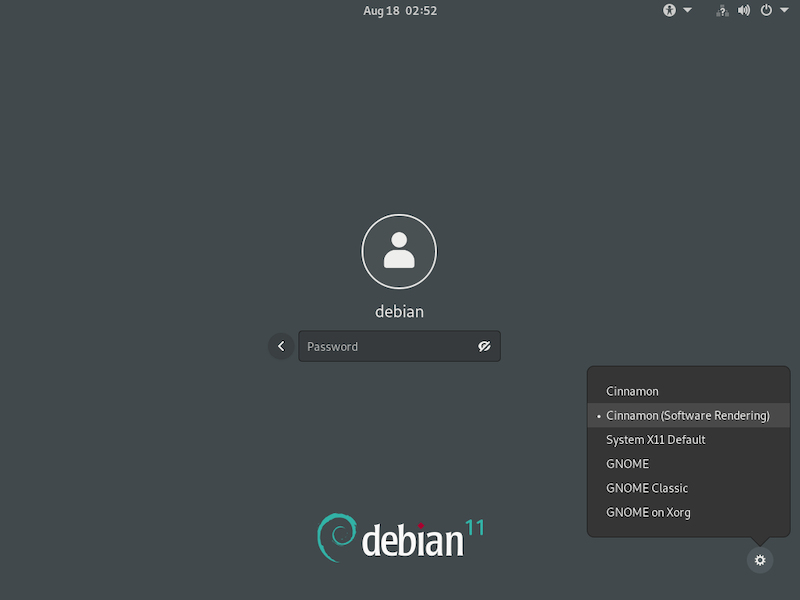 Congratulations! You have successfully installed Cinnamon. Thanks for using this tutorial for installing the latest version of the Cinnamon desktop environment on Debian 11 Bullseye. For additional help or useful information, we recommend you check the official Cinnamon website.