In this tutorial, we will show you how to install Linux Kernel 5.19 on Ubuntu 22.04 LTS. For those of you who didn’t know, Linux Kernel is a free and open-source, monolithic, modular, multitasking Unix-like operating system. It is the main component of a Linux operating system and is the core interface between the computer’s hardware and its processes. Linus Torvalds announced the Linux Kernel 5.19 which is available to download for general usage with new features, Major ARM updates, improvements, better hardware support, and other new updates.

This article assumes you have at least basic knowledge of Linux, know how to use the shell, and most importantly, you host your site on your own VPS. The installation is quite simple and assumes you are running in the root account, if not you may need to add ‘sudo‘ to the commands to get root privileges. I will show you the step-by-step installation of the Linux Kernel 5.19 on Ubuntu 22.04 (Jammy Jellyfish). You can follow the same instructions for Ubuntu 22.04 and any other Debian-based distribution like Linux Mint, Elementary OS, Pop!_OS, and more as well.

Before we can proceed let’s check the Linux kernel we are having with the following command:

By default, Linux Kernel 5.19 is not available on the Ubuntu base repository. Now we add the Cappelikan PPA repository to your Ubuntu system:

Next, update your repository list and install the 5.19 generic Linux kernel drivers using the following command below:

After that, you’ll find it in the applications menu. Open it and install Linux kernel 5.19 by selecting it from the list (it’s at the very top) and clicking on the “Install” button on the right side of the window. 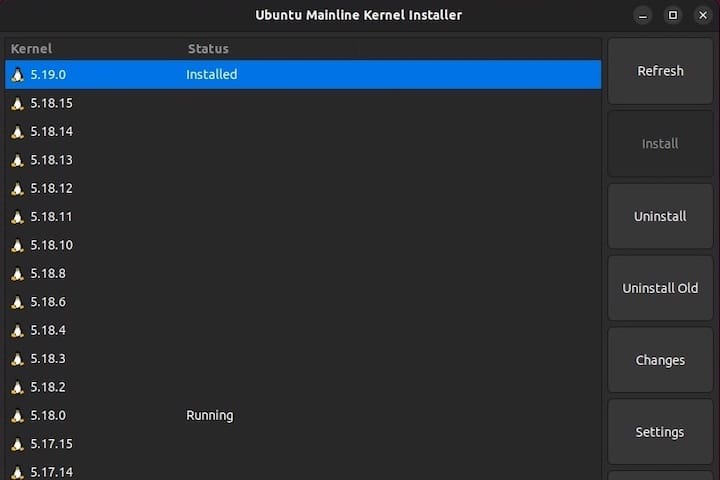 Once the installation succeeded, reboot the system and verify the newly installed kernel by using the below commands:

The output you will now get is like this:

If something goes wrong or you no longer want to use the newer kernel, you can always boot your Ubuntu installation with the standard kernel by pressing the Esc key repeatedly when your system starts booting to access the boot menu and select the default kernel.

Congratulations! You have successfully installed Linux Kernel. Thanks for using this tutorial for installing Linux Kernel on Ubuntu 22.04 LTS Jammy Jellyfish system. For additional help or useful information, we recommend you check the official Linux Kernel website.